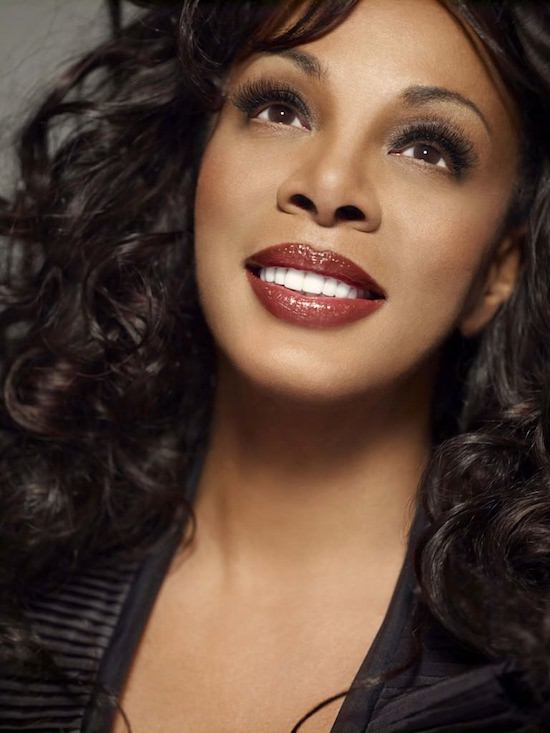 Listen to her "Whispering Waves" song above and enjoy that amazing melody filled voice of a music angel. I used to listen to this song when I was 18 in my room just thinking about my girlfriend Margaret at the time and wondered what it must be like to sit and watch the sunset on the Pacific Ocean in California. 30 years later I saw it daily when I moved to live there in 2008..

In 1975 "Love To Love You Baby" stopped me in my tracks on the dancefloor at the Wednesday night Woodville Halls Disco with DJ Steve Maxted in my hometown Gravesend. "What is this magic coming out of the speakers?" My 16 year old soul was spellbound.

I would later go on to DJ myself many times at the Woodville Halls, my home town's 1'000 capacity venue, with household name BBC Radio 1 DJs but better than that was 20 years later working directly with Donna Summer herself, remixing three of her songs, getting her back in the UK Top 10 singles chart, three times No 1 on the UK Club Charts and attending her concert at The Royal Albert Hall with her in 1996. A truly amazing woman, my favourite artist of all time.

My first remix was "Melody Of Love" in 1994 which naturally went to #1 in the UK Dance Charts because it was the return of a dancefloor Goddess. We did commercial dance floor mixes and Radio mixes as West End (me plus my team) and here's my 'épris' (in love with) remix which took inspiration from "I Feel Love" in its hypnotic groove and rolling synths plus the Donna's vocals chorused together under a strong string hook melody. The video recording is a bit low in volume so turn up your speakers. Donna was very pleased with this one personally.

It's a layered creation of a mix with Jocelyn Brown, Angie Brown and Kym Mazelle on vocals for that chorus refrain of "alright, sing it, sounds like, sounds like music", "Wanna Be Loved". Produced by EG the finger-popper.

Play the video below. Some reactions on YouTube also..

John Webb
This was the mix that I found most hypnotic & danceable. Such a great strong melody line. I took an electronic music composition course at Scottsdale CC in the mid 80's (thanks, Janet Stoppleman), & wish I could have had a strong melody for my rhythm composition.

Wombataz
My favorite mix, too. Most hypnotic dance track since "I Feel Love"

Forestkaat Prescott
Like all great dance music, this is one you can just put on the earphones, sit back & groove.. 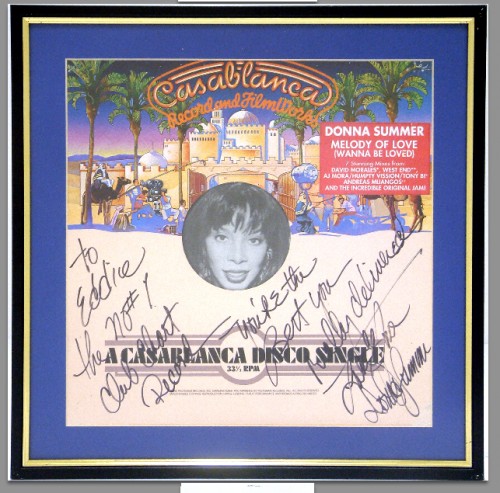 Next up was the re-release of "I Feel Love" in 1995. The original Giorgio Moroder and Peter Belotte 1977 production is in my mind the most perfect dance record ever produced because it totally revolutionised and gave birth to an entirely new genre of dancefloor music all by itself, electronic synth dance recordings. Thousands of hit songs after were recorded in the same way.

The '95 remix came about due to advice I personally gave in a meeting at the Mercury Records New York headquarters. To ask Donna back in the studio in New York to re-record the vocals of "I Feel Love" after hearing that the original masters were destroyed in a fire at the legendary Casablanca Records offices in Los Angeles, California. The 1995 remix I commissioned by Rollo became the UK's No 1 dance record of 1995 (see below), put Donna back in the Top 10 of the UK Singles Chart again and gave Manifesto Records the perfect launching pad - a huge hit single.

I didn't feel that I and my West End team could better the original genius recording by Giorgio Moroder, but I knew we could re-master and re-EQ that amazing original with up to date mastering production technology 20 years after it was first recorded. So with the assistance of the legendary mastering ace Jack Adams and Paul Dakeyne we delivered the "I Feel Love (Summer '77 Re-Eq '95)" version below. Which is a featured video on Donna Summer's very own legacy Youtube channel. Put your headphones on to appreciate the stereo panning from the original brought to the centre 'ear' in your head. Amazing still today from 1977 to 1995 to 2020. A real Buzz Lightyear recording - to infinity and beyond my friends.. 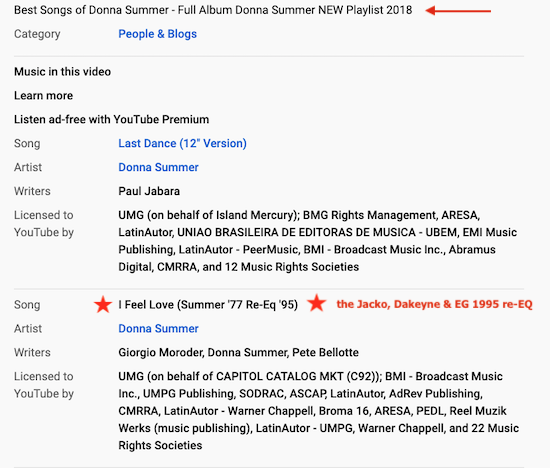 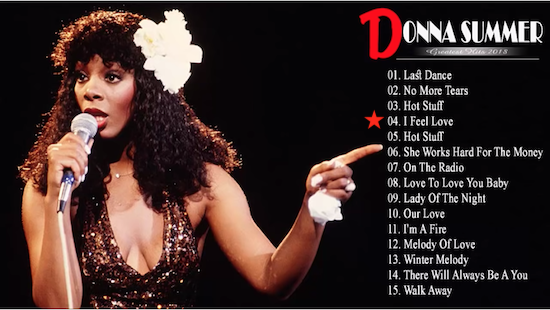 18 years old, July 1977 driving into Cornwall on holiday with my first love, her younger brother John and her Dad in a little cream Triumph 1300 car sitting in the back seat with Margaret, this song playing on the radio sounding completely different from anything else I had ever heard before - staring out of the window mesmerized in an outer-dimension music trance little knowing that 18 years later I'd be working with Ms Summer directing proceedings that would put this song back to #1 in the charts for her with help from Giorgio Moroder and Pete Bellotte. Donna Summer was so incredible to work with, truly my favorite artist of all time. I can honestly say that I loved her and still love her songs today. That drive in 1977 is so clear in my memory 44 years later that when I hear those opening bars of synth and teutonic beats I'm back in that car, rear seat, right window, looking out at the Cornish fishing village transported into the place I couldn't find the words for then, just happy being with my girl, (who I owe a big part of my music journey too) on holiday with her wonderful family and absolutely lost in this incredible recording. Below is an amazing 30 min 2018 version by my friend Pierre (the DiscoCat from Montreal) you have permission to lose yourself inside it :-)

The Mixmag 1995 best of the year chart 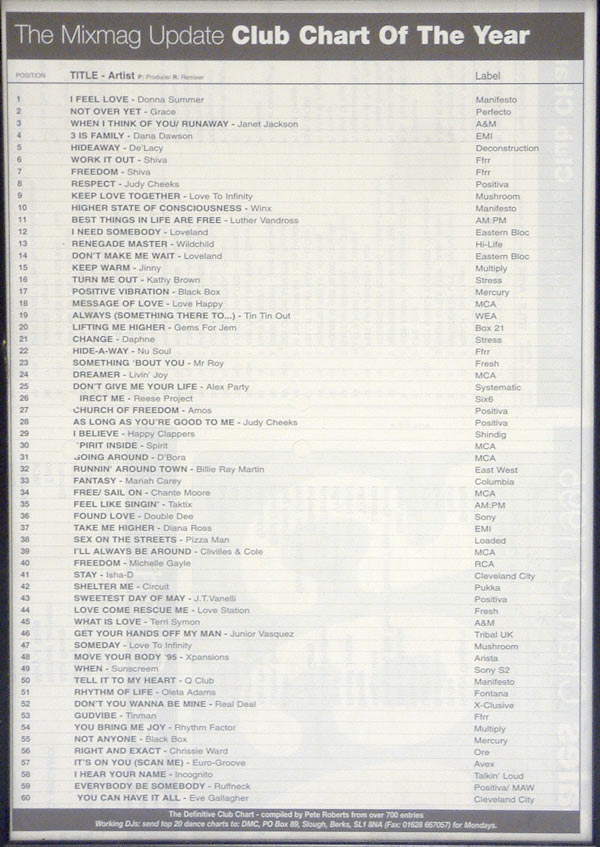 Once more we took Donna back to No:1 in the UK Dance Charts and back in the UK National singles chart at #13 with my New Millennium '96 Radio version. This was a very personal project to me with its history and lyrical content, so I spent two weeks mixing it with Steve 'Barney' Chase at Olympic Studios in Barnes, London including adding the Martin Luther King speech to fit the songs spiritual meaning. Check it out below. Some good reviews too.

In 1997 Mercury Records were unable to follow through with real budget support to allow us to make new material with Donna but eighteen years later in 2015,  after she had sadly passed, I pulled some EG magic out of the air.

Whilst working on the 2015 Grammys in Los Angeles at the Recording Academy based in Santa Monica, and driven by some inspirational messaging from high above, I took Brett Alperowitz (the Head of the newly relaunched Casablanca label) aside from our intense Grammy work and very (EG) passionately explained to him that a Broadway show featuring the best songs of Donna Summer could be a major commercial success, as her songs had never left the radio playlists around the world, much like ABBA's or Queen's legacy of great sing-along masterpiece's.

Fast forward three years to 2018 and a Broadway show, The Donna Summer Musical, opened in New York. (see below) 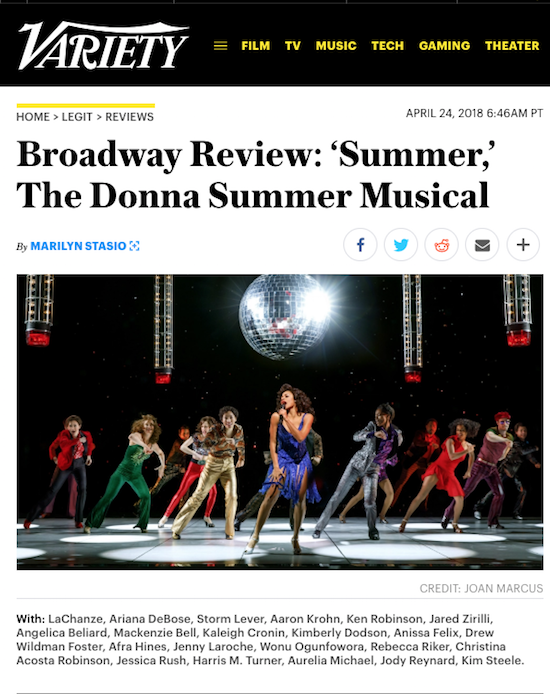 Sometimes all you have to do is light the touchpaper and the fire starts. I've done that a few times in my life, like the BBC Essential Mix Show, but please understand I know that I'm just the vessel (thank you Georgie) from something greater than my individual self, I have just learnt to vocalize passionately what "could be if it were given it's chance".

Sadly today Donna Summer is no longer with us, no longer fills concert halls around the world with her fabulous repertoire of songs because we've lost her. She was a one off, truly a beautifully amazing talent, who shaped my life and with the blessings of the music Angels I got the chance to give a little back. Bella Donna... God bless you always..