"Journalists do not live by words alone, although sometimes they have to eat them."
Adlai E. Steveson. UN Ambassador 1961-65. 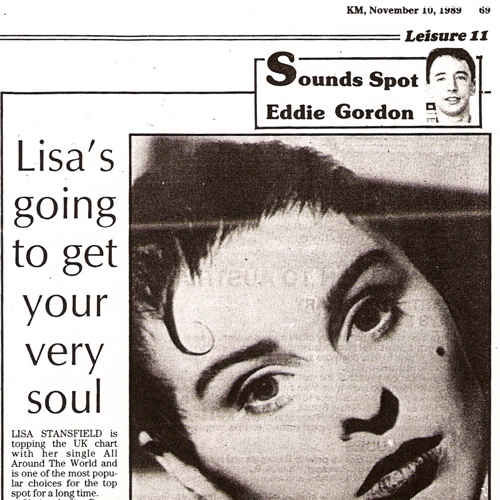 One fine morning in the early eighties I took it upon myself to make an appointment to go and see the Editor of the Gravesend & Dartford Reporter, in my home town of Gravesend, to inform him that I believed the newspaper, which was a local bible for everything but music, could serve the local community much better if it had a weekly Music column featuring local events, reviews, music charts and some gossip. It was missing out on a generation of readers and therefore advertising as well, I said confidently.

He looked at me sternly through his steel rimmed glasses, his tie loosened, top shirt button undone, the look of a man who'd already had a long day by 11:30am and uttered the words I shall never forget "why don't you write us one then every week? I'll pay you a small fee and it has to be in early every Monday morning or I'll be after you. Please leave all your details with my secretary and thank you for your input." I stood there for a moment thinking did I hear that right or imagine it all but he just smiled and got up to open the door for me. In 30 seconds flat I processed the request, decided I would give it my best shot, after all I had not long finished my English A-Levels, I could spell and write with some degree of readability. So I thanked him, promised to deliver, gave his secretary all my details then walked out into the sunshine of Harmer Street by the Gravesend ClockTower and thought, oh my God I had better go and buy a typewriter. The next week, after much two finger bashing and even more Tippex, the first ever Eddie Gordon's Street Scene was there in the local newspaper with my photo too. Incredible.

That day began a 10 year foray into the weekly demands of getting interesting information together then compiling it into one flowing piece of newspaper writing, or get fired from the column. As a Freelance Journalist I wrote for three newspapers in that ten years including 8 years for Kent's biggest County Newspaper, The Kent Messenger, which won UK Regional Newspaper of the Year countless times during the eighties due to its balance or journalism and local county information. The other newspaper was the Kent Extra which was a more relaxed agreement where I could stretch my writing mind a little more from the formula of reviews, news and forthcoming events, I could let my fingers do the talking, which gave me more confidence and therefore made the big one, The Sounds Spot column in the KM much better to read. The KM used to sometimes give me the whole page unedited. I loved writing, still do and for my career it taught me a new discipline. One that enabled me to progress further into the Music business too because I could write press reviews.

The Gravesend & Dartford Reporter was a local institution, it stayed on people's lounge coffee tables all week. It was a fantastic place to be featured as a young DJ/journalist. This new direction also gave me a significant edge with the Major record labels who sent me tons of records every week to write about. Not all were to my personal taste but I was taught a very valuable lesson by the Editor of The Kent Messenger, a great newspaper man called John Evans. He told me very firmly - "Eddie it's not your opinion that's important, because your taste will not be the same as the larger majority of our readers, its your ability to steer the readers into something they might like to know about by using a combination of knowledge and intuition. For example if you are sent a new album by a group that sounds like Dire Straits, just because you don't like it that doesn't mean they, the readers, won't. So use your ears, locate the closest comparison and simply say 'if you are a Dire Straits fan you'll most likely enjoy this new album by The Crumbs'. Its the lazy journalist, who has little knowledge that reaches for the negative word first instead of working to understand the information presented to them, on my newspaper we don't have lazy journalists. Write what you like but with respect to the readers and to yourself." My reward for listening to his advice was many fold, including opening my head to lots of different music genre's and Mr Evans gave me a totally free run every week for those eight years, I could write about anything music orientated that I wanted to and some of my best columns were explaining where certain kinds of music originated from or just free flowing writing about something I cared about in the music world.

Looking at today's world full of "expert" opinions which can also be very nasty too, I often think about John Evans and his take on the world. The tabliod fascination with celebrity's is such an empty way of earning a living when there are some truly fantastic people out there doing wonderful things for the collective good of society but no they'd rather suck on the teat of somebody's impending disasterous life and actually make it much worse. Its like gorging on a triple whopper hamburger, its an unwholesome experience afterwards. The freedom of expression and the constitutional right to free speech in our world is one thing but that should be balanced with the right to not be bombarded with totally made up lies being driven at us and the fertile minds of our children. We live in an information war now from the minute we wake up in the morning we are being hit from all angles, most of it is nonsense, like Christmas adverts in October for example or news on TV in 15 minute loops over the same thing again and again, even if its just conjecture like those two East London brothers, who's home the Police raided, shooting one of the brothers in the leg in the process, as it turns out they were not guilty, but by the time the news spins had finished with the TV brain-washing those two brothers were the anti-Christ and firmly planted as such on our TV numbed minds. Very dangerous for a democratic society. Its totally out of control and all to please the shareholders hunger for the advertising revenue spinning in during the commercial breaks. Advertising income over TRUTH.

Somewhat sadly, with the internet today, I can see the eventual end of the era of the newspaper, which will on the other hand may be good news for millions of trees, "literally" :-)

I revisited creating weekly columns in the early 90's by ghost writing a music feature for Piers Morgan in The Sun for a year when he was the gossip page writer before my studio work took preference over my weekly hours.

Below there are a few examples of old columns that I saved from those days. One particular highlight was predicting, after reviewing the Like A Virgin album by Madonna, that she would change the face of female fashion in the West, well she certainly did that and took her fashionable clothes off quite a few times too.

John Evans (editor of the Kent Messenger) thank you very much for all your wisdom, guidance and support.

The Kent Messenger won the Weekly Newspaper of the Year title in the Regional Press Awards for 1988 under John Evans editorial leadership and then went on to collect the title of overall national award for a regional newspaper. It's one of the highest accolades for a paid-for weekly paper in the UK.. I was still writing my weekly column for them, so I guess I helped a little. :-) 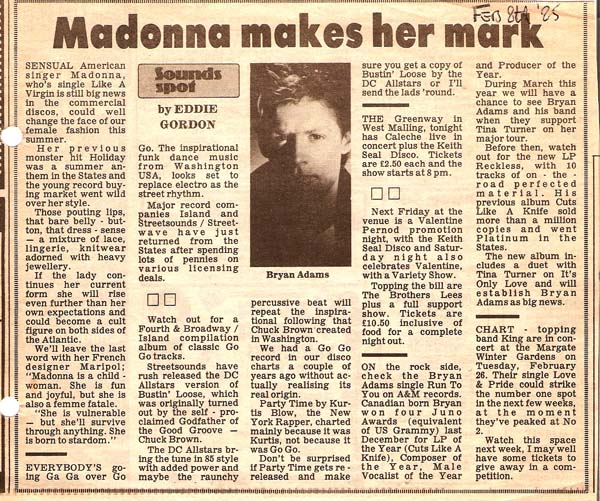 In 2017 Andy Fraser, a rock music artist from Maidstone in Kent, had a tattoo of the photos I added to a review I wrote for his album in the Kent Messenger back in 1989 as it was featured next to his favourite artist - Morrissey. There can't be many journalists who have had that kind of compliment (mad as it is :) See the photo's below... 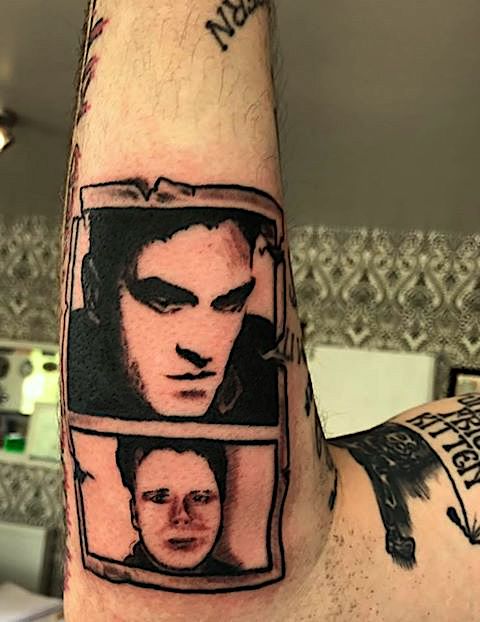 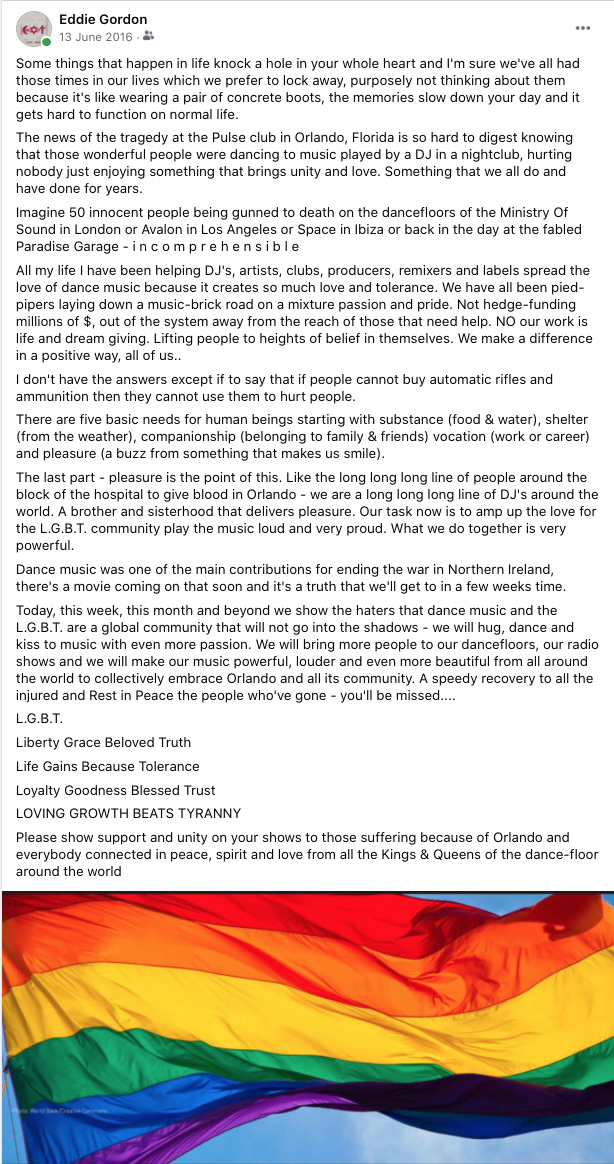