From Wikipedia - Earth, Wind & Fire (EWF) is an American band that has spanned the musical genres of R&B, soul, funk, jazz, disco, pop, rock, Latin and African. They are one of the most successful bands of all time. Rolling Stone magazine described them as "innovative, precise yet sensual, calculated yet galvanizing" and declared that the band "changed the sound of black pop"

From me - To my ears Maurice White and his group, Earth Wind & Fire were a gift from the music gods, there will never be anything like them ever again and I'm so glad to have been one of the many generations who were able to witness their music first hand as I was growing up and as a DJ. In my DJ days you couldn't go through a night without playing one of the EWF classics whether it was a cool club gig, a commercial club night, a birthday party or even a wedding for a friend such was the depth of the EWF collections of songs.

Sadly Maurice has passed away now, he was an amazing force of energy. One night whilst having dinner with him alone we went into the inspirations for some of his songs and one in particular, the incredible "Fantasy" (link below) came to him whilst he was at the movies with a girlfriend watching the 1977 Steven Spielberg epic Close Encounters of the Third Kind. He said he left the cinema immediately going straight to his studio as an idea had come to him from the story of the movie and the main 5 note melody riff.

With the help of his brother Verdine White and Eddie del Barrio, Maurice completed a Grammy nominated timeless classic that 40 years later is still being played on radio and will be for the next 40 years no doubt. If you listen closely to the 5 note melody of the main movie theme and the main rhythm melody of "Fantasy" you can hear the inspiration Maurice felt from Close Encounters.

Earth Wind & Fire. Saw them in concert at Wembley arena, one of the best live acts in the world at their peak with Boogie Wonderland, Reasons, Thats The Way Of The World, After The Love Has Gone, Lets Groove, Shining Star, Sing A Song, I Write A Song For You and September amongst many wonderful songs. Thank you for the music Maurice. May you rest in peace sir. 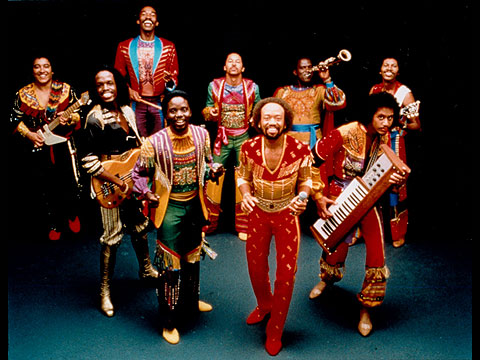 A decade later, another great act I was working with, Black Box from Italy covered "Fantasy" and it was a global smash all over again reaching # 5 in the UK singles chart too.