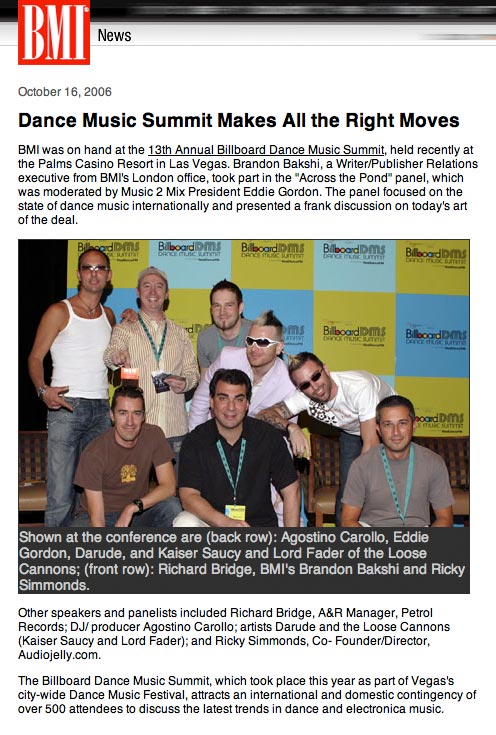 "The iPod is equal to the Elvis revolution in music, but the iPod as a phone will explode like the Beatles revolution in music." an Eddie Gordon prediction as a panel moderator for the above Billboard Dance Music Conference, in Las Vegas, USA. October 2006.

"A 2017 survey of more than 5,000 American teens found that three out of four owned an iPhone. Similar to two out of four US teens in the 60's owning a Beatles record.."

After years of being used to the sound of my own voice coming out of speakers via a microphone, as a DJ, I found speaking at conference panels on the subject of music quite comfortable and was lucky enough to be invited to the USA, Canada, Europe and even a Scottish University to share my theory's.

The many opportunities include keynote speeches for the Amsterdam Dance Event in 2000, Chairing Panels in New York and Las Vegas for Billboard Magazine in 2004 and 2006. A keynote speech on the future of Media and Radio for MusicWorks at Glasgow University in 2004 plus various panels throughout the late '90's and every year to date..

One stand out was being invited to attend a Billboard Magazine Panel in New York in September 2002 where I predicted to a closed room session of top music business executives that the digital delivery of music would take over the distribution of music. Eight months later iTunes was launched to the world and the rest is history as by April 2008 iTunes became the biggest music retailer in the USA. (click tab Digital Downloads - the Future)

Another highlight was receiving a standing round of applause for telling a room full of students at Glasgow University that from birth they belonged to the magic of music. That the two components that create music, rhythm and melody, are born within them. See full text below headed - MUSICWORKS, Glasgow University 2004 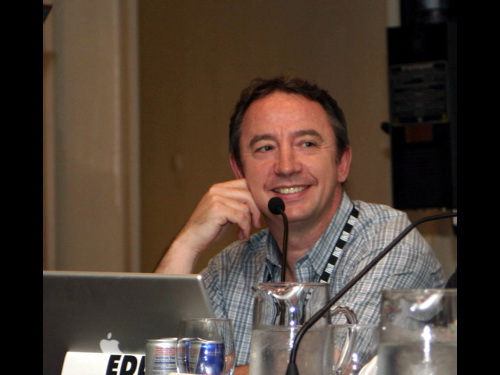 (Puffed Daddy eyes after no sleep on Sep 22nd 2004 in New York. I knew I was going to be separated from my daughter as I moderated this panel for Billboard - half a mind on my work and my heart down in my stomach)

Billboard DMS 2003 - The (Internet) Revolution will be Televised Eddie Gordon (DJInTheMix.Com) said that the 5 majors are concerned about marketshares, but they have to get on the internet and dance with the kids or die. ...

Billboard Dance Music Summit 2006 - Las Vegas Wrapup  Eddie Gordon (Music 2 Mix) predicted this on a DMS panel more than five years ago to an almost dismissive audience, stressing the importance of building a relationship with your music buyers.

At the Amsterdam Dance Event (ADE) in 2000 I gave a keynote speech, not about me blah blah and my hit records or artists I had worked with, but how human beings have it within themselves to glow, that we are all capable to do so and that some people work to glow brighter, like Madonna or Beyonce for example. That we all have the those abilities within us to succeed in what we love to do. I think some of the DJ's and music business folks in the audience attending the Key Note speech thought I'd been eating dope cookies for breakfast in one of the famous Amsterdam Cafe's but years later this evidence came out below...you can be too far ahead of the curve sometimes! 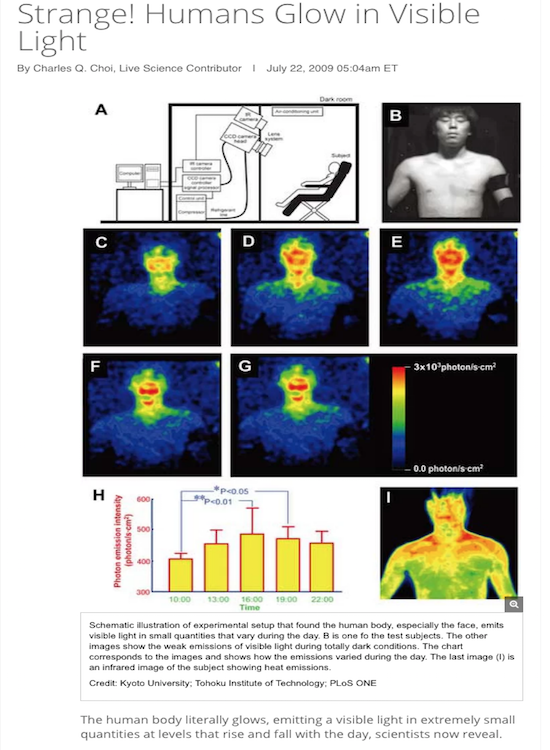 Posted by David Pescovitz, July 24, 2009 11:46 AM | permalink
Japanese scientist have shown how the human body glows with visible light. The quantity of light emitted is 1000 times too dim for our eyes to see, but the researchers imaged the glow with special cameras. The light is tied to metabolism, suggesting that measuring it could have medical applications, says Tohoku Institute of Technology scientist Masaki Kobayashi. Meanwhile, New Age aura-seers everywhere scream with "vindication." From LiveScience:

In fact, virtually all living creatures emit very weak light, which is thought to be a byproduct of biochemical reactions involving free radicals.

(This visible light differs from the infrared radiation -- an invisible form of light -- that comes from body heat.)

To learn more about this faint visible light, scientists in Japan employed extraordinarily sensitive cameras capable of detecting single photons. Five healthy male volunteers in their 20s were placed bare-chested in front of the cameras in complete darkness in light-tight rooms for 20 minutes every three hours from 10 a.m. to 10 p.m. for three days.

The researchers found the body glow rose and fell over the day, with its lowest point at 10 a.m. and its peak at 4 p.m., dropping gradually after that. These findings suggest there is light emission linked to our body clocks, most likely due to how our metabolic rhythms fluctuate over the course of the day. 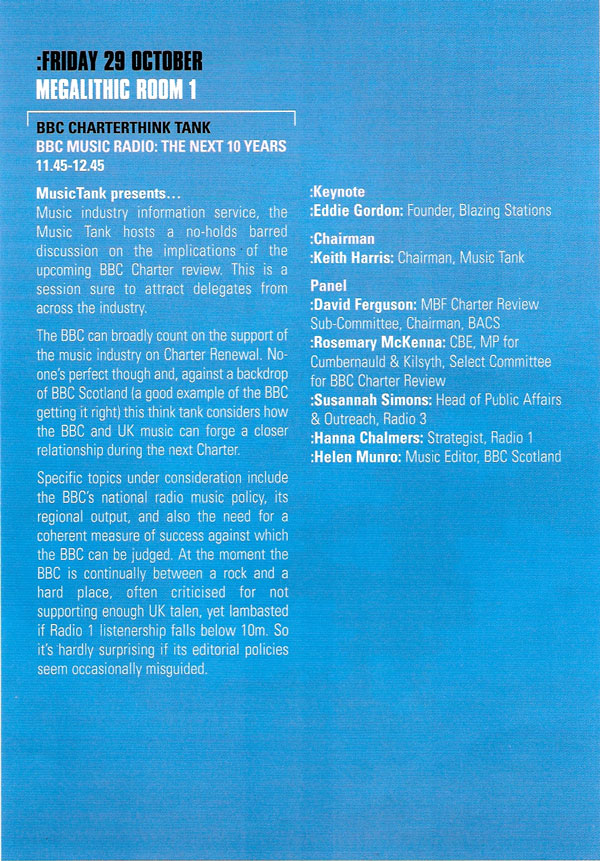 "Eddie Gordon is the man behind the Manifesto, NEO labels and over 150 Top 40 UK hits singles. He has been instrumental in BBC Radio 1's dance music programming over the last fifteen years and is soon to launch Media2Radio an online radio promotions company in the USA. Here are his visionary views both past and present." . Below is a summary of what I had to say that day, again avoiding bragging about the hit records and trying to leave an impression that was inclusive rather than I'm exclusive...

"Music is not a secret club. You don't one day learn to like music the way you learn to speak, swim or ride a bike. Music is our birthright - we are all born with music's two components, rhythm and melody, inside us, each and every one of us. So whether you want to be a musician, a singer, a producer or a DJ you don't need a certificate to enter the world of music. We are already all members from birth.

I've spoken at Music Conferences in Europe, America and in Glasgow University for the BBC. I've seen people dance to music in all corners of the world, on beaches in Thailand, Goa, Bondi, Cape Town, Honolulu, Rio, Miami, Dubai and in the dark days of Belfast with the Europa Hotel still smoking from a bomb the day before as young Catholics and Protestants kids danced under the same roof oblivious to their elder's war mongering.

My experience's are from seeing people enjoy and love music around the world. Like most top DJ's today do..

I've witnessed nearly 2 million people gathered on the streets of Berlin from many different countries, gay-black-straight-yellow-old-white and young all locked as one, united by music, I have seen numerous music festivals, weekenders, Coachella, Ibiza, Glastonbury, Phoenix, Creamfields and the party at Formula 1's first Grand Prix in Bahrain with no alcohol, just music on offer. A good deal of BBC Radio 1's dance music ideas in the '90s through to 2015 came from me including the Essential Mix Show, BBC Radio 1 in Ibiza, the UK Love Parade and the BBC Radio 1 Millennium One World presentation.

So where does music come from ??

Here are my two simple explanations.
A: practical.
B: spiritual.

B. MUSIC. The components. I have told this simple explanation to hundreds of people, including Keynote speeches at conferences and I will probably still be telling people when I'm ready for my last supper.

So where does Melody and Rhythm come from?

Please allow me to explain.

Rhythm = You and your body are a mass of mathematics and rhythm. Everything balances. You see, hear, breath, eat, beat, walk, talk, love and dance (some do) in rhythm. The first thing you learn to do independently as a baby is to crawl and then walk - in rhythm. If you tried to walk three left steps then one right fast you'll fall over. So rhythm is not a mystery - you, I, we are all rhythm. We build things in rhythm around us or our houses would fall down and our cars would not drive - we are totally formed around our ability to understand and create rhythm, its what separates us from the animal kingdom, plus the fact that we have fingers and thumbs to build things made of rhythm.

Melody = This is an easy one to get your head around. Melody is the very first ‘language' between yourself, as a baby, and your mother (father). For the first 20 months of your life your interaction with your family is soothing, cajoling, noises in melodic tones/voices. If an adult growls at at a baby it will cry. If a mother "la la la's" the baby warmly it smiles whether that mother is Aboriginal, Eskimo, African, Chinese, Norwegian or any human mother. Our first language is love with melody and that 'language' is Universal. We all speak the same language the world over for nearly the first two years of our lives. Which is why we associate melody so strongly with affection. Hearing a great piece of melody people often react physically "oh I love this song". The "Melody Of Love" as Donna Summer once sang.

There’s a very logical reason for the chill-out/ambient music revolution - we need our fix of melody and these days clubbing is mostly a non-melodic experience. Over 15 million Cafe Del Mar albums for example. It's also one of the key reason's for the explosion of artists like Alicia Keys, Nora Jones, Jamie Cullum, Jamie Scott, Amy Winehouse, Adele, Duffy, Katie Melua, Adele and Emeli Sande.

On the whole the radio and record industry the world over do not really understand why people listen to the radio or buy music. They know they do and if they hear certain records often enough they will want to own a copy of that music/song in numbers sometimes in millions of people.

Unlike the experience of reading your favorite book, watching a video/DVD or eating a favorite meal, we enjoy a loved song or record a hundred times over at the same intensity, sometimes in repeated plays. How many times have you heard White Christmas by Bing Crosby ? Yet still it resonates within us like a glowing fire. Music takes us to a special place and always will. People buying, wanting, loving music is not a mystery and they always will want it in their lives the world over. 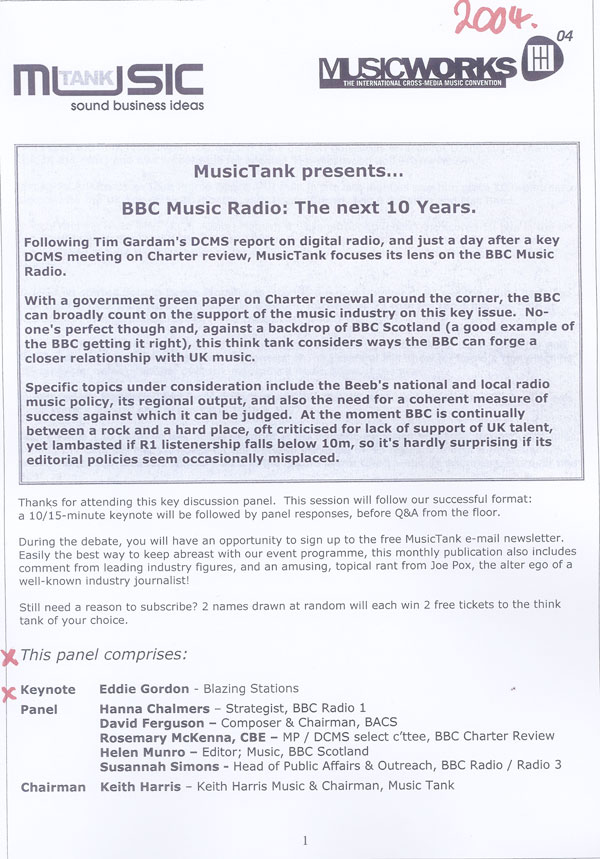