The Essential Mix changed my life 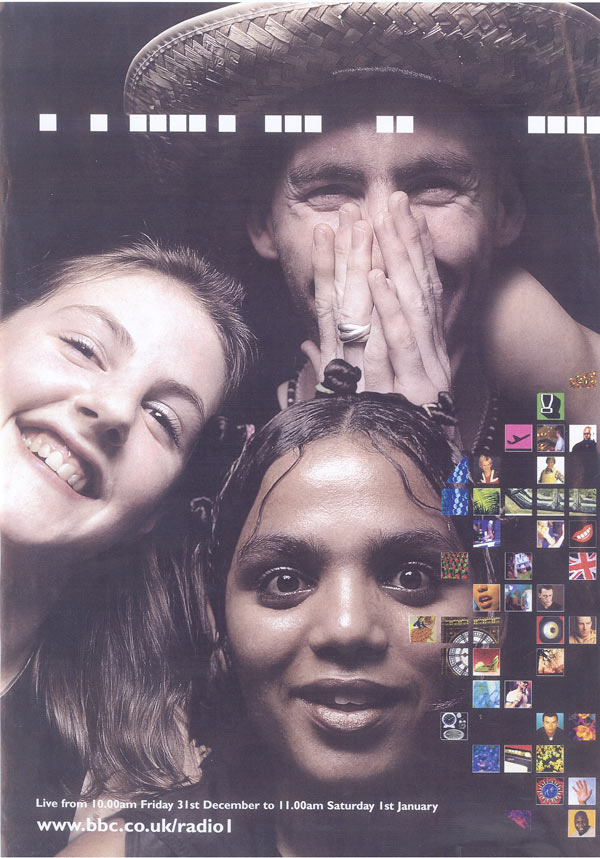 Radio 1, the much-criticised 'trendy' station of the BBC, is actually, usually pretty bad, admittedly. Right? Yeah. Hour upon hour of mindless, disposable, interchangeable, mainstream pop malarkey can get very, very, annoying - particularly if you've just been woken up by the aural, er, delights of the oh-so grating nasal Northern whine of Sara Cox. Think you've gotten away with it? No such luck - that's just the beginning. And then, right through to 8pm is the eclectic, yet horribly conformist blend of everything mainstream, whilst just managing to cross genre boundaries to keep everybody happy. They're not happy. They're just bored. Honest. And then, come 8pm onwards on a regular weeknight, we're 'treated' to alternative music, peaking at 10pm with the, ahem, legendary John Peel (legendary for playing utter cack? Sure). Weekends, however, hold brighter things for R1. Friday evenings kick off with House music guru Pete Tong with his acclaimed Essential Selection, whilst his Radio 1 dance cohorts - the likes of Seb Fontaine, Judge Jules, Danny Rampling and Dave Pearce, more often than not, succeed in ensuring the weekend on the airwaves goes with a neat, slightly-mainstream, dance music twist.

It hasn't always been this way. Dance music - in whatever popular form (most commonly, House, Trance, Garage, or Hard House) hasn't always been commercial; hasn't always been considered mainstream. Of course, the chart invasions of Trance in 1999, and Garage in the years following, have ensured that Dance - as a huge, winding genre, has become popular - and not just to a hardcore selection of fans. But, inevitably, people don't like to follow the commercial path, and go elsewhere in their search of fresh, new, more credible tunes. Almost every tune you know came from the underground, non-commercial scene, somewhere.

But think back, wayyy back to around 1992, and the scene that we now affectionately look back on as 'Old Skool' (the k's there for no apparent reason; only succeeding in making the word 'school' look a whole lot more clumsy than it actually is). The early, early, Rave scene of the 90s was beginning to fade, and in was coming music with a slight hint of progression, innovation, and yes, originality. And although the forthcoming chart success of N-Trance's (although they weren't Trance, honest) fabled 'Set You Free' gained the most attention - and perhaps rightfully so - a new sound was beginning to slowly form and evolve in the dance underworld: a sound that was, alas, not marketable enough for the mainstream market, but simultaneously, encapsulated the raw, energetic qualities of some of the more commercial, popular tunes, and blended them with a new edge: a murkier, darker feel. The music industry felt the popularity of this early form of dance music - a form that was actually credible, and not knocked up by some aspiring teen on their keyboard - breathing down its neck. Radio 1 therefore, had a dilemma. Required to bring as wide a range of music as possible to the listening public, yet possibly wary of alienating some by introducing Dance on the mainstream programmes, there seemed to be no easy option. Not, until, Eddie Gordon, in 1992 had an idea for a show that would be as easily accessible to its target audience as it could possibly be - a Saturday night/Sunday morning radio show with only the most credible of Dance music played. Fast-forward a year, to Saturday 30th October 1993, with Pete Tong on the decks from 2am to 4am that night (yeah, ignore the technicalities: clubbers are up all night, y'know), and the Essential Mix was born.

Understandably, perhaps, the show's become somewhat legendary amongst the clubbing - and Dance music-loving fraternity in general. Each week, countless tape recorders are set for the traditional time, whether the prospective listener is going out themselves or not: the taped mix will provide much basis for conversation, debate, and of course, listening pleasure, over the next weeks, months, or even years in the case of something spectacular occurring. That spectacular something was unleashed on an unsuspecting audience on December 18th, 1994 - over a year into the Essential Mix's lifespan - and this would prove to be its defining moment. A rookie, relatively-unknown DJ by the name of Paul Oakenfold had stepped up to the decks that night. What resulted has gone down in Dance music history as the best mix - if not the singular best moment - that the genre, the show, the DJ, have ever had. Now simply known as 'The Goa Mix', Oakenfold span together two solid hours of mesmerising material: crossing boundaries with it, as Trance, Classical, and even movie soundtracks were seamlessly integrated. 'The Goa Mix' has gone down as the highest-rated mix ever by members of the unoffical fan website of the Essential Mix (http://www.tracklistings.org), with a collective average score of, amazingly, 9.68 out of 10 accumulated over the seven years since its broadcast - a phenomenal achievement, indeed - simply nobody can turn themselves away from doing anything other than adoring the mix - one emotional user on the site's forum was even quoted as saying 'The Goa Mix changed my life'. He was being serious, too. And it did, for so many people; it opened their eyes to the endless possibilities of Dance music and the potential it held, and holds still. It may not surprise you, then, when I say that, in the seven years since 'The Goa Mix', Paul Oakenfold has become the world's biggest, highest-paid DJ: yet his fame, fortune and popularity all rest almost solely on The Two Hours That Made Him, way back in the twilight of a Sunday morning in December, 1994. That's how big, how important, how influential the Essential Mix actually is, and part of the reason why its legend is so honoured.

Indeed , almost literally, every big name in the world of dance music has participated in their very own Essential Mix. And if they weren't big then, then their two hour slot on Radio 1 one Sunday morning probably made them so. From Air to Agnelli & Nelson, Alistair Whitehead to Armand Van Helden; from Brian Transeau to Basement Jaxx to Boy George; John Digweed to Judge Jules; not to mention, to name but a tiny few; Moby, Paul van Dyk, Fatboy Slim and Erick Morillo; Sasha, Seb Fontaine, Trevor Nelson, Underworld and Tony De Vit (R.I.P.). Get it? Almost everyone's been there; almost everyone's done an Essential Mix. Special mentions though, must go out to the two men with the largest repertoire of Essential Mixes: the man who started it all, Pete Tong, and long-running fan favourite, Carl Cox: both of whom have complete well over seventy - 70 - mixes between them. That's quite some going - indeed, around 140 hours of music scheduled at 2am each weekend.

Similarly, almost every classic tune over the past two decades has been played within the Essential Mix's time slot. Tunes have been made; tunes have been broken, depending on listener reactions. The most popular earn a place in clubbing folklore, whilst the others? Nobody remembers; and merely anticipate the next batch of potentially life-altering tunes. Some good examples would be the like of The Future Sound Of London's 'Papua New Guinea', DJ Tiesto's mesmerising remix of Delerium's 'Silence', and Sasha's 'Xpander', to name but three.

But one of the Essential Mix's primary factors in its popularity has always been about progression. It enables the artist to experiment, without the pressures of conforming to a radio-friendly time limit; they can expand, refine, and most importantly, innovate, their musical styles. It hasn't always been about studio work though: some of the show's finest moments have come from live mixes, working to a live audience, at events such as Homelands; mixes from Radio 1's regular trips to Ibiza, and of course, the legendary New Years Eve sets. But if you're under the impression that it's all about House and Trance, then you're wrong. Obviously, a high concentration of the mixes are based around these two most popular genres, but Garage, Techno, Ambient and more have all had their chance in the past - and future, no doubt. Indeed, Radio 1 stepped, unprecedentedly, into precarious ground with the June 1997 Essential Mix, featuring Happy Hardcore gurus Force & Styles. Surely a genre that could be recorded as almost 200 - two hundred (!) beats per minute - couldn't get exposure on national radio? They let it happen; and it did. The result was, again, a defining mix, a defining moment in the artist's career - and despite the flagging popularity of the genre at the time perhaps - the mix was instantly popular - if not mainly purely for nostalgic reasons.

But even over seven long years of transmission, not every big name has had an opportunity to strut their stuff on the true stage of dance music. There's still several DJs I'd like - no, love - the chance to listen to within an Essential Mix: the likes of European Trance gods Ferry Corsten and Armin van Buuren constantly at the top of many readers' 'wants lists', among others. Surprisingly though, a revered pioneer of the entire 'Euro' Trance movement that hit popularity around 1999, Dutchman DJ Tiësto, had never done an Essential Mix until recently. By popular demand (oh, and neatly coinciding with his release of track '(Sub)Urban Train'), Tiësto finally Made It on September 9th, 2001 - as if he wasn't popular enough. Unfortunately, international events just two days after the transmission focused all eyes elsewhere than the usual weekly debate, and the mix was left untied by many long-term E.M. fans. However, the mix itself was a joy to behold - much o f his old 'euphoric' European-sounding Trance was left behind in favour of some dirtier progressive sounds (as with his 2001 'Revolution' compilation), but whatever the man touches turns to gold, and some more classic-sounding tunes made the cut. The [official, according to tracklistings.org] tracklisting of the two-hour set promised much, to say the least.

Needless to say, we were not disappointed. Opening with a distinctly house-orientated introductory few tunes ('Half Lit Wood', 'Smoke Machine'), the mix soon took on a definite Progressive edge with Cass & Slide's new tune - though, unfortunately, slightly lacking in vocals when compared to previous release 'Perception'. However, the tune still makes for an outstanding addition to the set; before more anthemic territory is entered with the inclusion of a tune that's soon to be massive commercially, Vaiio's stunning vocal piece, 'Rapture' - a track already highly-listed on Radio 1's daytime playlist, and even more so come the dance shows themselves. An ironically-bitter, lustful vocal is fol lowed by Solicituous' 'Furthermost', which sets the scene for a relentless barrage of warped, synth-dominated Progressive House for the best part of the mix, before the joyous bootleg of Tiësto's own 'Flight 643' and Kosheen's chart hit 'Hide U' - otherwise known as Windsider, and 'Hidden Flight'. Poor title, ace tune - and perhaps the turning point in the set, from good, to spectacular. Dear listener, things only got better from there on in. The obvious, crowd-favourite, Tech-Trance of 'Flight 643' itself provides a rare 'wave your hands' moment, before several more emerge in the form of following tunes 'Fancy Fair' and 'Pneu'. Fred Numf's remix of the excellent Wheed Baskin - 'Castle Rock' only combines perfectly with THE tune of the set, Tiësto's '(Sub)Urban Train' - a future classic of a tune, of that there is no doubt - which is subsequently followed by 'Redseal' and much-played 'Sepia' ordering a classy finale to one of the best Essential Mixes I've ever heard. Ever. The man's a Trance god, that much is clear - but the Essential Mix, as it did for so many others, may have just paved the way for bigger and better things: and what price it'll continue to do the same in years to come?