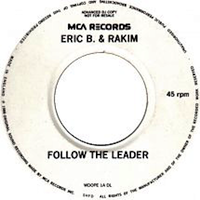 A very cool hit for MCA in the UK that we got into the National Chart at # 21 in 1988 when it wasn't easy to get Rap records on the radio, either BBC or commercial stations but we built up a head of steam in UK the stores through the specialist dance radio shows.A lyrical step up from the already incredible Paid in Full album, this track really showcased Rakim's lyrical prowess. He takes the listener on a metaphorical voyage into outer space.

The song peaked at #9 on the Rap/Hip Hop charts when it was released in 1988, and has since become one of Eric B. & Rakim's most recognized singles.

Samples of the song include "Nautilus" by Bob James, "Listen To Me" by Baby Huey, "I Wouldn't Change a Thing" by Coke Escovedo, and Eric B. & Rakim's very own "I Know You Got Soul" (from their first album, "Paid in Full").