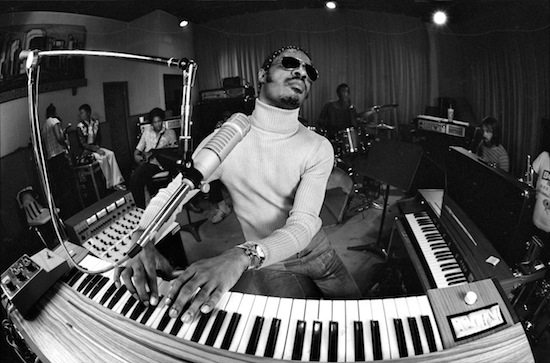 There a some lives that can never be duplicated, Stevie Wonder is one of them. His album "Songs In The Key Of Life" from 1976 is one of the all-time classic albums ever recorded. There are other Stevie albums but that one expresses emotions with such clarity you forget that he's been blind since his very first year yet from aged 10, for 58 years, he's been writing songs and singing his heart out. He was signed as an artist to Motown aged 11 after a member of The Miracles heard him performing one of his songs.

I got to work with Stevie Wonder in 1989 at Motown for his 41st birthday record releases and Wembley Arena concert. He is an artist I regard as the most incredible gift from God ever. Just listen to his album The Songs In The Key Of Life and realise that this is a blind man writing, singing and playing those songs, using his extra sensory ability to create his magic for all of us to enjoy. I believe if there was a Poll in the USA for America's most gifted,' wonderful' singer song-writer he would come in at Number 1 because so many artists still today credit him as their major influence. Being able to work with him was a dream of dreams for me personally.

His understanding of what its like to be told by love that its over, to go to the door of her home to collect the things that she wants to give you back. That journey he feels so poignantly because its much more than just an "Ordinary Pain" in your heart. He's a poet of our times, a true genius.

If it's magic...
Then why can't it be everlasting
Like the sun that always shines
Like the poets in this rhyme
Like the galaxies in time

If it's pleasing...
Then why can't it be never leaving
Like the day that never fails
Like on seashores there are shells
Like the time that always tells

So...
If it's special
Then with it why aren't we as careful
As making sure we dress in style
Posing pictures with a smile
Keeping danger from a child

So...
If it's magic...
Why can't we make it everlasting
Like the lifetime of the sun
It will leave no heart undone
For there's enough for everyone﻿

I've seen Stevie perform in London and in Los Angeles here is one of his shows in full from a London concert at the O2. Britain loves Stevie too..