How to celebrate two Millenniums in one day. By flying backwards over the International Date Line from Sydney Australia to Honolulu Hawaii with dance music the choice for this unique occasion. An Eddie Gordon concept/idea to full reality for the BBC and the dance music world. Delivered with aplomb, putting dance music on the front page and centre stage.  Back in 1984 the only dance music section on BBC Radio 1 was 12 mins a week, called Steppin Out, every Monday at 6pm on the Peter Powell show. A mission of change was pledged. 16 years later on the most significant day of the century, Dec 31st 1999, we had 24 hours. The UK's most powerful radio station locked into dance music. Mission achieved... Thank you. 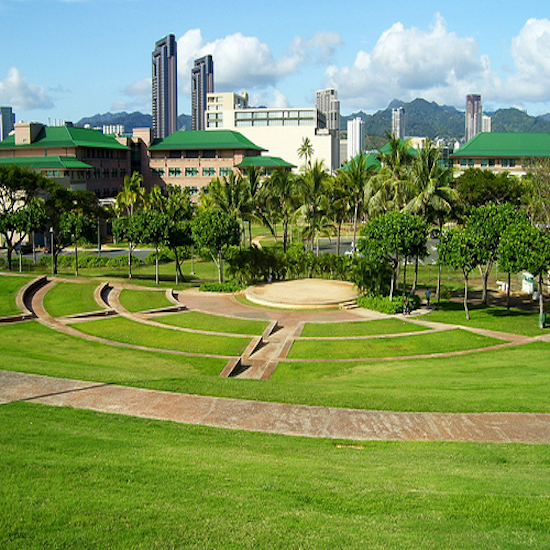 ABOVE - The beautiful ocean facing Kakaako Waterfront Park, Honolulu Oahu, the venue for 10'000 Hawaiians to see in the Millennium to DJ Carl Cox and DJ OO-Spot. Broadcast on BBC Radio 1 on Sat 1st January 2000 live to the world.

One of my truly greatest visions. To celebrate the new Millennium with events linked around the earth's dateline from Australia to Hawaii. It took a great deal of explaining but I believed from the outset it could be done.

In January 1998 I approached the Controller of BBC Radio 1, Andy Parfitt, with the idea of broadcasting these parties as an all day celebration of the turning of the next 1000 years.

He fully embraced the idea and sent me around the world accompanied by Jonathan Ruffle a BBC radio legend and Steve Richards a BBC Outside Broadcasting Expert. We went around the world twice all coordinated by Jonathan who used to produce the Steve Wright and Simon Bates Radio 1 shows so was always up for a crazy idea or three.

The three of us had an absolute blast to tell you the truth visiting India, Germany, Australia, New Zealand, Japan, Thailand, Brazil, South Africa, New York, Los Angeles and Hawaii in the USA, Singapore. Many of the photos on this page are from the places visited.

Then to crown it all we actually pulled the events off. Jonathan and I really did have two Millenniums by crossing the dateline from Sydney, Australia to Honolulu, Hawaii. Leaving Sydney at 4am Sat 1st Jan 2000 and arriving in Honolulu at 8pm Fri 31st Dec 1999 after a 9 hour flight in a plane full of party people, transvestites and DJ's.

The Bondi Beach gig in Sydney was broadcast live in the UK on BBC Radio 1 at 1pm in the afternoon to the world. I did the countdown on the mic, DJ Carl Cox drove them wild with his music and 15'000 people on the beach went loopy-loo but the best reception was in Honolulu because it was the biggest dance music event to ever hit the island, plus was fully endorsed by the Hawaii Governor as their official State of Hawaii Millennium party. The crowd were so hyped up that they were running at the stage in sheer mania. It was electrifying and made me smile proud at the madness of it all looking up at the stars in the open Hawaii night sky while Carl Cox set about them with his tunes and the stage security threw the eager bodies back into the audience like some crazy mosh pit at a stadium rock concert.

An amazing 24 hours and conceptualised all in my head 24 months before whilst eating breakfast in New York after completing a triple city '97 New Year's Eve broadcast in London, Manchester and New York. It was worth the heartbreak of leaving Manifesto Records to do this, amazing. We did it. Dance Music wrapped its arms around the entire world on the only Millennium night we all will ever see ! 20 years later dance music is truly global for all major media and brands. Many international dance DJ's are now millionaires too :-)

BELOW - Jan 2000 - a 40 minute British TV documentary called the "Race Against Time" with the quote "a template for the future" from yours truly EG. Also featuring Ian Parkinson, Carl Cox, Greg Dehnert, Jay and Rachel Birchwood. Narrated, somewhat disingenuously, by Pete Tong who spent the night in Liverpool and London instead of Sydney and Honolulu, leaving Carl Cox to be the only DJ ever in the world, in history, to complete TWO MILLENNIUMS. I am pleased it was Carl - the peoples DJ....

ABOVE - Countdown at 29:50 - real history for Carl, the only DJ ever to see in TWO Millenniums behind the turntables live on the BBC around the world. Well done Carl, Greg & Jay.

BELOW - in the DJ area of the Kakaako Waterfront Park event, overseeing the Radio broadcast of Carl's Millennium set from Hawaii to the world and back to the UK where it was about 11am in the morning on Jan 1st and we were still on 'air' with techno house music on BBC Radio 1. Carl is shuffling through his records (remember those days) and I'm exhausted but happy knowing we were nearly at the finish line. We'd all done it, made history TWO MILLENNIUMS. Carl today sees it as one of the biggest highlights of his career. I'm very glad he saw the vision.. 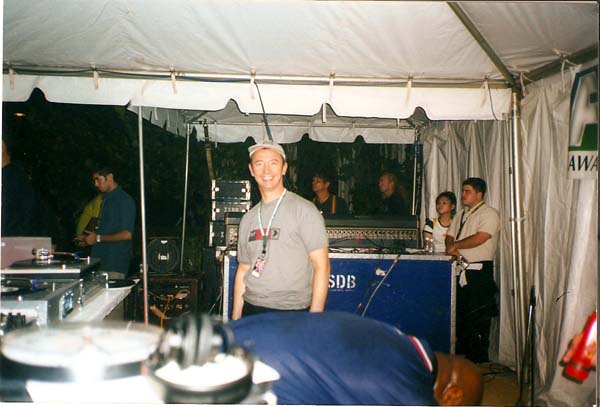 Below - 1998 - The south shores of (Oahu) Hawaii on a pre-req visit to access the viability of the final leg of the shows being beamed from the island. All dealt with then in 1998 until Dec 4th 1999 (27 days before the Millennium, after a year and half of planning) the Principal of the University of Hawaii informed Greg Dehnert, our promoter and a cool DJ (00Spot) on the island, that our BBC gig was off due to the threat of the Y2K Bug possibly causing literal rape and pillage of the college. I immediately flew back to Hawaii on air-miles, without alarming the BBC bosses in London and we successfully negotiated the much better scenic outdoor venue of the amazing Kakaako Waterfront Park. The planning was never a dull moment and I tell you the first thought that entered my mind on Sat 1st January 2000 when I opened my eyes after an exhausted sleep (we'd been on the go for over 36 hours from Sydney to Honolulu) was, thank God I never have to think about organizing this event ever again. It's done. BUT it wasn't there was more snags to sort out later, Mr Tong not showing up for his 2nd gig of the night in Wales, then flat out ignoring the promoter a few days later... The phone starts ringing in Hawaii... 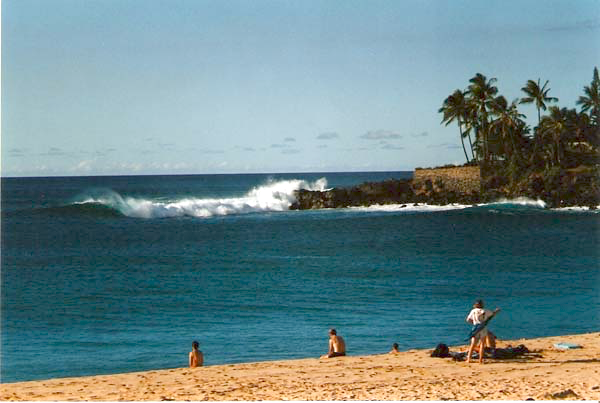 "Beware - BBC Boys on the Beach".  Jonathan Ruffle (backpack) and Steve Richards (red shirt) strolling on Copacabana Beach in Rio Janeiro, Brazil in 1998. Notice the hairy guy in the black speedo looking at 'those two crazy guys' fully dressed walking on the sand. We nearly lost our camera gear on that beach earlier in the morning to a group of local lads playing football but I noticed the attention being caused and steered my guys off the beach to the main road amongst a group of people. A little savvy always comes handy when you have grown up on the streets of Gravesend.

'Ruffle at Raffles'. Jonathan Ruffle (light blue shirt sleeves rolled-up) and Steve Richards (white front t-shirt) standing outside the famous Raffles Hotel in Singapore in 1998 with the promoter, Andrew, from the Zouk nightclub (also on the left) 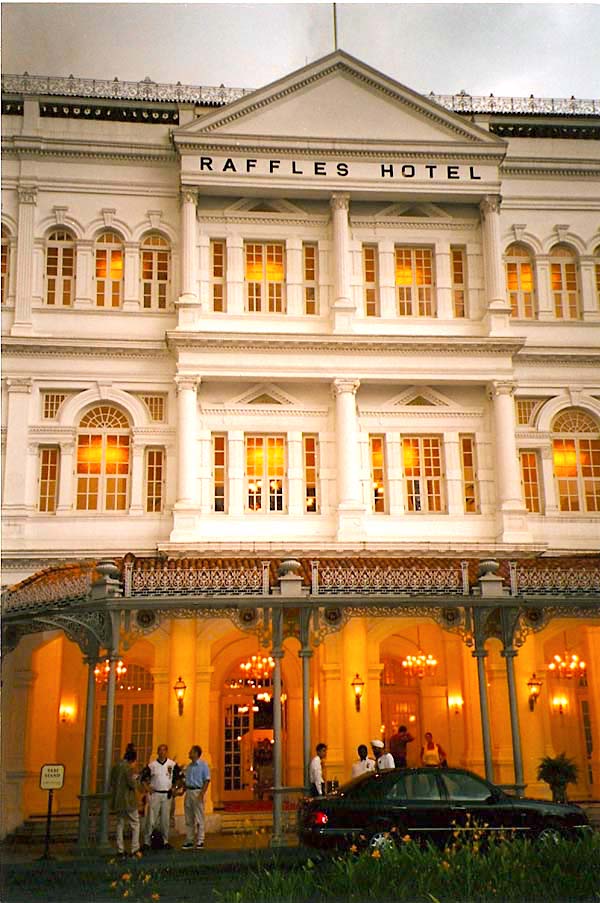 Below - Overlooking the Arabian Sea, the Taj Fort Aguada Resort & Spa, Goa. We had a crazy couple of days here in GOA trying to get a party organised with a super friendly promoter Jay, involving Bubba Monk's, a huge Python snake, the debris of the Monsoon everywhere on the beach, a wonderful colonial dinner and a life lesson about human energy stored on concrete dancefloors from the released anxieties of international dancers from previous raves. I will endeavour to explain at another time. An unforgettable experience with Jonathan & Steve, who I'm sure wonder to this day, 23 years later, if it all actually happened. 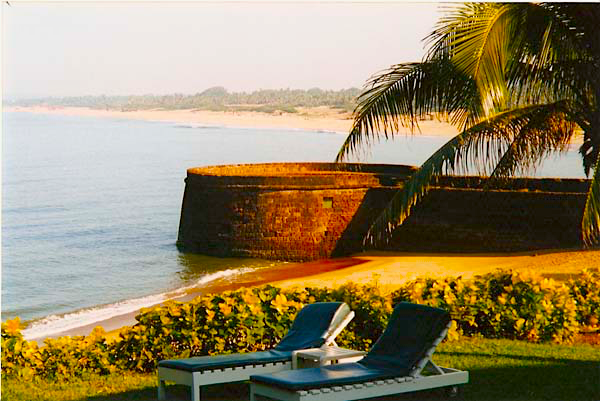 Gee Hawaii  - Eddie Gordon If I've never said so: let me say it now; U were a major part of my Triumphs. From Doing a Documentary which discussed my trials n tribulations as a DJ & Promoter: that Broadcast on TV Everywhere on the Planet (but the US by my request, to broadcasting my DJ set on DEC 31st, 1999 to 20 countries and Almost Tea Time in England , & most importantly to being a friend. I remember taking a moment alone in the dressing room B4 I hit the stage at some festival in Regina Canada; there was a magazine on the Table "The Most Powerful People in the Music Industry on the Planet" U were listed #3. I said out loud to an empty room "that's my friend".. 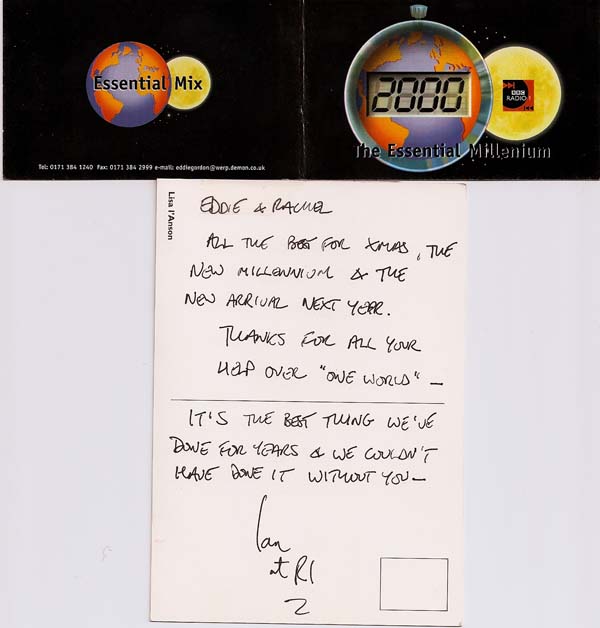 Below - CAPE TOWN, SOUTH AFRICA for DJ DANNY RAMPLING. The photo below is the famous Taple Top Mountain where the cloud sits on top in the morning. It's a beautiful sight to see and Danny rocked the South African city's people that night as they danced into 2000. 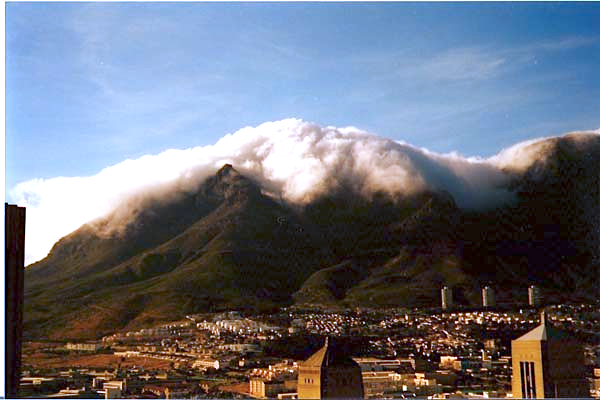 Danny Ramplingg - Eddie great music history reference site. Thank you for being highly influential and guiding me with my radio career and many other DJs on Radio, and placing me to R1 and producing the shows with Jeff Young. we had great times through that golden period, particularly the Cape Town 2000 NYE Millennium show and all our live broadcasts from Ibiza and the live essential mixes across the UK.. Sadly good things come to an end, and both yourself and Jeff Young suddenly departed R1.. Subsequently not long after you guys had gone the management created the worst ever moment of my entire career in music being by axed from something I loved with so much passion enthusiasm presenting the LGDP to the world from BBCR1. The show's listening figures that year were increasing as a result of our combined efforts and committed dedicated work weekly.  My departure really showed me parts of the industry for what they truly are, as when i was on air many were perceived allies great support and friends with music from the labels the show supported and club nights i played and supported on air.  After my untimely exit some of those companies and people in the UK industry sadly stopped supporting my DJ career, with the hot of the press acetate promo productions and bookings at many leading events festivals .. It's taken me years to come to terms with the negative humiliating impact of losing a great radio show. On a positive note you are a beacon of light in the industry and have and continue to give myself like many DJs your experienced advice support. I am eternally grateful to you and your team for giving me the opportunity to reach the top off the radio tree at R1 where i stayed for several years every weekend. We supported many labels artists club as a platform on the show and broke so many hit records throughout and shaped many other music careers. We did something very special throughout that period as a dedicated team, that experience is priceless we lived the radio dream and changed the British clubbing landscape it sure was the golden years. Keep up the good work Eddie.