Sleeze was a night run above a very commercial nightclub called Joanna's in Canterbury Street, Gillingham Kent from 1987 to 1989. We ran the Sleeze nights once a month on Friday with a packed attendance from the best of North Kents dance music following. No dress code, only invited access and DJ's Gilles Peterson, Norman Jay, Jeff Young, Dancing Danny D, Adrian Sykes, Pete Tong, Aadil, EG, Craig & Marcus plus guests in regular rotation. It was such an easy night from all sides. The people attending Sleeze came to dance to great new and old music spun by DJ's who wanted to play to them. We only had 1 doorman because there was never any moment that something was going to turn bad. Probably some my best nights in Kent happened here at Sleeze and it was down to the people on the dancefloor smiling and dancing with total appreciation for each other and the DJ of the night. We should have called it The Ease instead of Sleeze because it was so simple to run. The night was given the accolade of Kent's Best Night Club '88 by the county press and deservedly so I think. Thank you Sleezer's for some great memories. 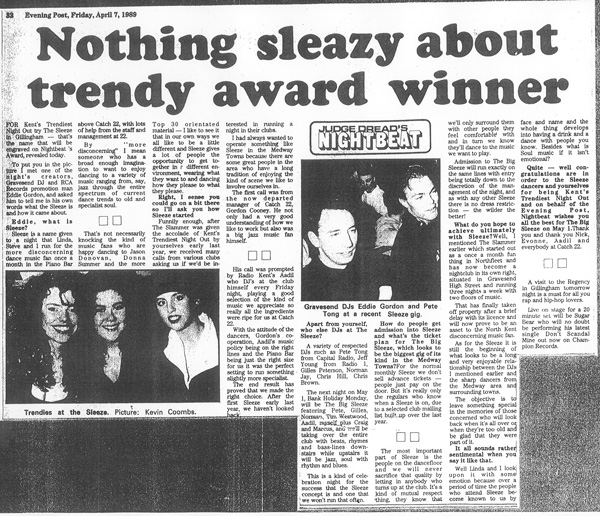