West End - The Love I Lost

No.3 National Chart and No.1 UK Club Chart for 5 weeks. House. 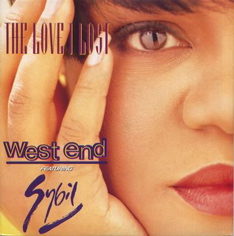 The truth on the West End attachment here is the following. I was West End, solely, I was signed to PWL, Pete Waterman's label, with my idea of re-recording the song The Love I Lost, we had another vocalist, Ann Marie Smith, but a wonderful guy called Tilly Rutherford at PWL suggested Sybil instead and we went with that choice. I then spent weeks at night in the PWL studios with Tony King an engineer and Asher a keyboard player, together we had produced remixes under AKA as a remix name, as West End was mine alone, when working in a new team a new name is just fair.

I couldn't be West End and the remixer at the same time, so AKA was used and rightly so because the work the three of us put into that recording was intense. We created the mix for radio which Pete Waterman cloned after with faster drums, they used EXACTLY the same drums on Sybil's next record, When I'm Good And Ready. Talk about lazy. Play the two records together and they will flange. The Love I Lost Unrequited remix was a total AKA mix as was the The Love I Dub, which in fact was a total of six dub mixes with the best parts edited together to form one 13 minute underground remix for the big DJ's playing in the Ministry Of Sound club. That mix was a huge success in the House clubs and was played on all the New York Radio Mix-shows by DJ's like Tony Humphries and Frankie Knuckles.

The finished record features no other outside remixes just ours and was a UK Club No.1 for 5 weeks as well as peaking at No.3 in the UK National singles Chart in 1993. I did the club promotion by myself but it was easy as the record was always going to be a smash thanks to Sybil, Asha, Tony King and thank you Tilly Rutherford too.

The reason you won't find my EG name on the record is because Pete Waterman and Mike Stock decided that due to the success of the Love I Lost 'they' would now be West End until I threatened to sue them with backing from my American Express legal insurance of £250'000, I actually had to have that conversation with Waterman. They backed off spitefully, hence the sad behavior with the label copy. They then sent a fax, which I still have, around to the UK's major labels A & R departments to say that I played no part in the recording process to try and stop West End from being hired as remixers by the UK industry, all it did was make us more popular for standing up to him.

West End went on to build Eternal's legacy with 6 Club Chart #1's on their first six releases as well as #1's for Dina Carroll, Donna Summer and many others. "You have to stand up for yourself in this world son, don't come home beaten" my Dad always preached to me.

Finally they, PWL, sent me a BPI disc for 200'000 odd sales with Eddie Gordon engraved on it and for years paid me a royalty cheque, so publicly were saying one thing but legally another. A further spike in their ire was when West End featuring Sybil went on Top Of The Pops and the announcer, Tony Dorty, introduced the act on TV with "and the man behind West End is Eddie Gordon", after another PWL employee at the TV show rehearsal told Tony what Waterman was up too. Multi Millionaires but the same old story from rich but scared, paranoid people.